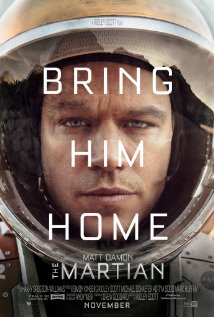 It is the movie many space tech enthusiasts have been waiting for: a big-screen adaptation of Andy Weir’s book “The Martian”. Directed by Ridley Scott, the movie, like the book, promises to be a technically-accurate, action-packed story of human ingenuity and endurance on Mars. Originally set for a November 25 release, it has been moved up to October 2.

So you thought Tom Hanks had it rough surviving on an uninhabited island in “Cast Away”? Try being left for dead on Mars, stranded on a barely habitable planet with a handful of potatoes and no hope for rescue within the next four years. That’s what happens to astronaut Mark Watney, played by Matt Damon, during one of the first human expeditions to the Red Planet.

Watney is presumed dead when the rest of his crew is forced to evacuate during a fierce dust storm. Left with no communications and little air, water or food, Watney’s slim-to-nothing chance for rescue will require that he engineer a 1,864 mile (3,000 km) trek across the planet for a potential rendezvous with the next crewed mission.

Weir’s book has been praised for its realism, but there has been some disagreement as to whether the storms on Mars would carry so much destructive force in such a thin atmosphere, but it does set the stage for the rest of the story.

In fact, when this reporter (for SpaceFlight Insider and USA in Space) asked Weir if he would change anything in the movie, he told me, “Yeah, I’d replace the sandstorm at the beginning with an engine test failure. A real Martian sandstorm can’t cause damage like what’s shown in the story.”

“Mostly, my job was just to cash the check,” Weir said when he was asked if had been involved with the movie’s development. “Though they did send me the screenplay to get my opinion. They are not required to listen to anything I have to say. They keep me updated on the production because they’re cool.”

Like the book, the movie promises to portray a technically accurate image of NASA’s future human missions to the Red Planet. The film places its protagonist in the same position as the crew in Ron Howard’s Apollo 13 or Ryan Stone in Alfonso Cuarón’s Gravity.

To add to its credibility, NASA played a major role as advisors to the movie. Dr. James Green, NASA’s Director of Planetary Science, told this reporter how this collaboration came about. “Late May of last year, 20th Century Fox contacted NASA and asked them to look at the script and asked if they could provide advisors,” Green said. “The Martian is such a great book, from a number of aspects. NASA said, sure, we would be glad to help you. What do you need?”

According to Green, Ridley Scott really wanted to understand NASA’s concepts and concerns for the exploration of Mars. Dr. Green, with permission from NASA’s Public Affairs Office, was able to organize tours to give the filmmakers what they were looking for. He arranged a visit to Johnson Space Center (JSC) in Texas for Arthur Max, the movie’s Production Designer.

“I had him meet the top Mars human system designer, some of the NASA biologists that are into farming on Mars, and we took him through the habs (habitats),” said Green. “We talked about NASA’s approach to living on Mars and what the habs would look like on Mars. We have some mockups of those. Showed him some of the (Mars) touring vehicles […]. It was a very stimulating, free-flowing conversation, for a full day.”

Green said NASA has been thinking hard about human missions to Mars for the past couple of decades, having reached a full half-century of robotic operations there. “We have been all over Mars for quite a while,” he said. What we’re learning about the planet with unmanned missions is crucial for enabling future human exploration.

Both the novel and the space agency itself were speaking the same language in terms of the use of what is known and what is available in terms of exploring the Red Planet.

In The Martian, the spacecraft that is used to send the crew to Mars uses ion engines for transit between Earth and Mars, a technology NASA is now using extensively for robotic exploration.

Mars is similar to Earth in many ways, it has unbelievable vistas, enormous vistas and is the likely next step for humans in our migration beyond Earth. The movie gives NASA an opportunity to say, yes, Mars is like that, it has challenges, and beauty. It allows us to begin national and international dialog about going to Mars, and what we’re really doing in comparison to the movie.

“Here’s what the movie will do,” said Green. “I predict the movie will be tremendously popular. It will be popular because it is more realistic than any other Mars movie I have seen and it does not involve lasers, fast spacecraft, aliens, and dangerous robots that try to kill people or any of that, and yet tension and excitement will be just as high as any previous movies done about Mars. That is because it is all about honest exploration, taking a risk, stepping out.”