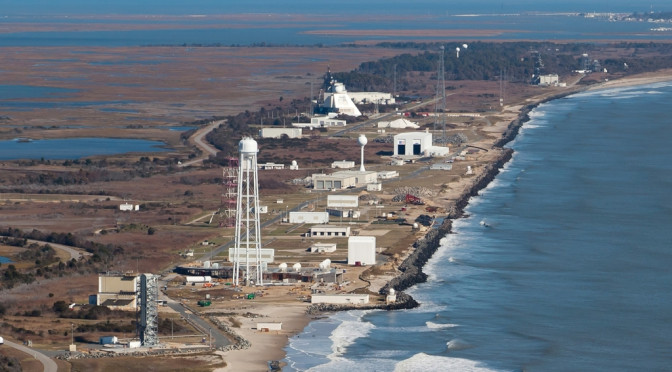 The Wallops Visitors Center is located on VA 175 near Chincoteague, Va. – (more personalized write up coming soon). Current write up from Wikipedia, the free encyclopedia

There have been over 16,000 launches from the rocket testing range at Wallops since its founding in 1945 in the quest for information on the flight characteristics of airplanes, launch vehicles, and spacecraft, and to increase the knowledge of the Earth’s upper atmosphere and the environment of outer space. The launch vehicles vary in size and power from the small Super Loki meteorological rockets to orbital-class vehicles.

The Wallops Flight Facility also supports science missions for the National Oceanic and Atmospheric Administration (NOAA) and occasionally for foreign governments and commercial organizations. Wallops also supports development tests and exercises involving United States Navy aircraft and ship-based electronics and weapon systems in the Virginia Capes operating area, near the entrance to the Chesapeake Bay. In addition to its fixed-location instrumentation assets, the WFF range includes mobile radar, telemetry receivers, and command transmitters that can be transported by cargo planes to locations around the world, in order to establish a temporary range where no other instrumentation exists, to ensure safety, and to collect data in order to enable and support suborbital rocket launches from remote sites.

The WFF mobile range assets have been used to support rocket launches from locations in the Arctic and Antarctic regions, South America, Africa, Europe, Australia, and at sea. Workers at Wallops include approximately 1,000 full-time N.A.S.A. civil service employees and the employees of contractors, about 30 U.S. Navy personnel, and about 100 employees of NOAA.