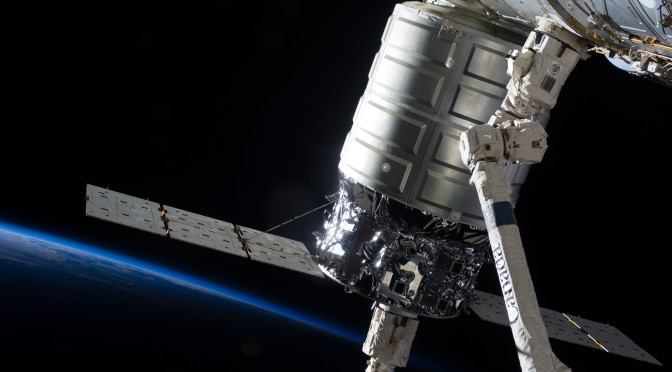 Designated the “Orb-3” or “#ORB3” for Twitter, it will be the fourth Orbital Science “Cygnus cargo mission” to the ISS and the fifth Antares launch in the last 18 months. A two-stage Antares rocket carrying Orbital’s Cygnus cargo spacecraft is scheduled to lift-off from the Mid-Atlantic Regional Spaceport at Wallops Island, Virginia on Pad-0A.  The current schedule is for “no earlier than October 20, 2014” with a targeted launch time for the 20th of 9:29 pm (EST) reaching the International Space Station (ISS) approximately 3 days later. After separation from Antares, the Cygnus spacecraft will deploy its solar arrays and undergo initial check-out. The spacecraft will bring itself within 4 km (about 2.5 miles) of the ISS prior to receiving authorization to autonomously rendezvous with the station. When the vehicle approaches to within 12 meters (about 50 ft), the ISS will use it’s robotic arm to grapple Cygnus and berth it to the Harmony node of the station. Cygnus is planned to remain connect to the ISS for approximately five weeks during while the station crew unloads supplies and reloads it with materials for disposal. After Cygnus departs the station, it will reenter the Earth’s atmosphere. For this mission Cygnus will carry approximately 2,290 kg (5,050 lbs.) of cargo to the ISS for NASA.

The Orb-3 launch will be viable from much of the east coast on the US and  will be broadcast live on NASA TV. .